If you look on the sovereignty maps, you’ll find the Providence region broken down into a tumble of small spaces owned by minor alliances. Compared to the large mono-color swaths of space in null-sec regions held major alliances such as IT, Atlas and their ilk, the patchwork of small Providence holdings resemble nothing so much as a clutch of Skittles candy. 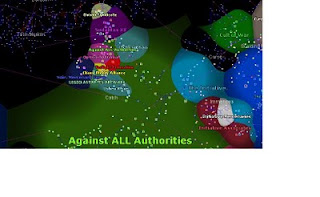 The name, originally bandied about the forums as an insult, has caught on and you’ll sometimes hear a New Providence holder referred to as a “Skittles alliance”.

The “Skittles” model, initiated by Against All Authorities (AAA) came into being as a result of the Dominion sovereignty mechanics initiated in December of last year.

As I’ve written elsewhere, under the new sovereignty rules taking systems is a much easier proposition than under the old POS-based scheme. Consequently, a null-sec alliance must garrison hostile frontiers with sufficient force to respond quickly to attacks and turn back an invader.

Further, the higher costs involved with the new sovereignty scheme (a minimum of 180 million per system per month) means any systems not producing a return on investment become drains on alliance resources. Alliances are heavily incented to hold sov only in systems that deliver either a financial or strategic advantage. An alliance indiscriminately gobbling up systems it cannot exploit takes on a significant financial burden.

After removing CVA from Providence after the Dominion upgrade, AAA appears to have recognized the disadvantages of holding and administering the region themselves. Instead AAA handed the systems off to a number of small alliances that, even together, do not pose a significant threat to AAA. In this way, AAA secures its frontier without having to spend resources maintaining sovereignty over space it couldn’t (or didn’t wish to) exploit.

A look at maps of Catch, Querious and Delve illustrate how the new mechanics are impacting the use of null-sec real estate.

If you check sovereignty history on systems in these regions, you’ll see that they were almost universally held by an alliance prior to Dominion. This pattern changes significantly post Dominion.

Roughly a third of Delve’s systems remain unclaimed, even though (with the exception of a single system) IT alliance is the sole player sov holder in the region. Querious, after Goonswarms breakup in February remains largely empty. The region is largely within IT Alliance’s sphere of influence, and IT controls most of the strategic systems. However, roughly 70% of Querious systems are officially unclaimed by any alliance and, one assumes, are largely unexploited.

Catch, on the other hand, is a hive of activity, with relatively few unclaimed systems. AAA rents out systems in space it controls to renter alliances. When a system becomes available, industrial corporations within renting or friendly alliances may bid for use of the system. The winner pays both a monthly fee to AAA for the right to claim sovereignty over the system, as well as outright sovereignty costs. In return for the monthly fee, AAA guarantees and enforces the renter’s rights to the system and its assets.

AAA appears to have been the first alliance to realize that unused systems represent a potential source of passive income. Other large alliances appear to be catching on, and this is reflected in the sovereignty maps where new skittle alliances are beginning to pop up in the corners of regions that were once monochromatic.

We may be on the verge of a financial arms race.

With the additional passive incomes, owners of spheres of influence may pile up huge war chests to be used in preparing for, or during the execution of a military campaign. By the same token, encroaching on another alliance’s sphere of influence can reduce their access to the income needed to wage a long-term war.

Even tiny Noir Mercenary Group, a Skittles alliance itself who were given control of the H-KW4A constellation in Providence by AAA after CVA’s eviction have joined the game. They have farmed out sovereignty of TXJ-II to Lucky Starbase Syndicate rather than take sov (and the attendant costs) from CVA themselves.

If large passive incomes become a strategic necessity for null-sec PVP alliances, their ability to attract and retain high performing industrial corporations within their spheres of influence may become as important as PVP strategy and tactics.
Posted by Mord Fiddle at 10:25 AM