I had to send Jenny, my research librarian, to look for my copy of Adam Smith's The Wealth of Nations. Today, were going to talk economics and the cost of doing business post Planetary Interaction (PI).

Everybody strap in, it's going to be a bumpy ride.

Blake, author of the K162space blog wrote this week about the billions he's made speculating on the PI commodity market.


I bought a lot of Mechanical Parts at NPC prices, 646.00 ISK, before Tyrannis hit the shelves and have made a killing on this poorly implemented expansion.

I read the dev blogs, Akita T’s posts, and played around with extraction rates on the test server. All my Excel sheets showed Mechanical Parts costing around 8,700 ISK to make. Once the actual Jita price hit that level, I dumped my stock.

Now, while it's true that certain P2 commodities have gone through the roof (for the moment), I take issue with his assertion that this happened because the manufacturing costs of those items is too high. Blake's Excel sheets are, I believe, simply wrong.


Once online, a facility based on an Advanced PI Command Center can manufacture about 300 units of Mechanical Parts per day. This assumes the same PI facility is extracting the raw materials, and producing the reactive and precious metal inputs to Mechanical Parts as well as the P2 Mechanical Parts themselves. Output will vary depending on the precise set-up, but for our purposes let's hold to that 300 per day.

The cost for the above facility is a bit less than 6.5 million. At 300 units per day, it will take 33.4 days to produce the 10,000 units of Mechanical Parts needed to drive my per-unit manufacturing costs down to roughly 650 isk - about the cost at which Blake bought his pre-PI inventory. As production continues, the per unit cost asymptotically approaches zero.

So, over a fairly short period of time, manufacturing costs for Mechanical Parts will drop significantly below the $8,700 anticipated by Blake. Selling the inventory well below Blake's sell point will repay the initial facility investment very quickly (10 days assuming an average price of 2,200 ISK per unit), after which it's pure profit minus trivial export fees.

"But Mord," you ask, "If Coolant, Mechanical Parts and such are so cheap to make, why has their price gone up? Why is Blake hauling in all those iskies?"

See, before PI, all PI products were price controlled. They entered the market from NPC stations at a fixed price. All across New Eden, the same Mechanical Part, or Caldari Control Tower could be gotten at the appropriate NPC stations for the same price. You could buy them and sell them elsewhere, but that amounted to playing around the margins of the controlled price.

If you sold for less, you were losing money. If you sold for more, you had to compete with the controlled NPC price. On top of that, NPC sellers had a nearly infinite reserve of inventory to sell, which restricted the influence of supply in PI product cost.

When PI price controls were removed, the market reacted.

In many cases there was a sudden spike in price while player PI production moved to fill the gap left by the removal of NPC inventory from the market. Mobile Labs, for example, jumped quickly from their fixed price of 90 million to 110 million ISK when PI was introduced.

POS fuels like Machine Parts, however, are inexpensive commodities. Players tend to stockpile them, especially when supply may be uncertain. When you have an inventory cushion like this in place, you're price-elastic; if you don't like the market price, you can wait around for a better price to come along.

But, when the POS start crying for Mechanical Parts and the POS fuel hanger is empty, you become price-inelastic. You can't wait. You've got to buy at the going market rate if you want to keep your labs, harvesters and refineries on-line. 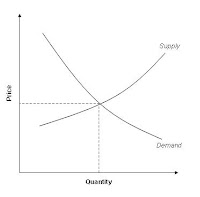 Most produced units never see the market. They are used as inputs to P3 products, or produced by POS owners who consume their own product and bank up any the surplus for future use. Some nullsec alliances, in a bid to be independent from empire, forbid the export of PI products from their spheres of influence. All of this conspired to create a scarcity of supply.

Demand went up. Supply did not. Prices rose. Some players started buying up available inventory in order to protect themselves against future price increases. Traders bought and held inventory in order to sell against higher prices in the future. All this drove prices up further. Wash, rinse, repeat.

This is called a market bubble.

However, before you rush out and start stocking up on P2 POS fuels, bear this in mind: Buy low. Sell high.

As I explained above, the price of a Mechanical Part is way out of line with that the manufacture cost of that part.

If the price is high and the cost of manufacture is low, it's almost a sure thing that prices will go down. High prices draw new producers into the market. The prospect of getting even 8000 ISK per unit for an item that costs next to nothing to manufacture is going to tick up production pretty quick. Inventory is going to go up as all those CareBears go for their piece of the pie. Next thing you know, we'll be in a race for the bottom.

So, why hasn't this happened already? I suspect the cool factor - a market influence particularly powerful in EVE.

Because of the 'cool' factor, Mobile Laboratories dropped very quickly from that 110 million ISK high to their current 48 million. Advanced Mobile Laboratories that sold for 150 million at NPC prices can be gotten for 70 million. A Caldari Control Tower that would have cost you 350 million pre-PI can be had for under 195 million now that players are building them. If everybody wants to build a thing its price is going to come down.

And trust me, there's nothing like an obscenely high profit margin to make a thing cool.

So. If Blake's spreadsheets were wrong, how did he make all that money speculating on Mechanical Parts?

And I don't say that to dismiss Blake's accomplishment. In markets, luck is as important as smarts. There are a lot of Wall Street traders who'd rather be lucky than good. I know a couple of guys in EVE who bought up every control tower they could afford. Their own spread sheets that showed tower prices were going to go through the roof. It was a can't-miss opportunity. However, most of them got burned when the cool factor made mock of their spreadsheets.

In his blog opening Blake says the Tyrannis PI implementation was flawed. I don't think that's the case, except insofar as EVE's markets behaved the same messy way as markets in Real Life do. Yeah, I could complain that Mechanical Parts shouldn't be so expensive. but then I'd have to complain that Caldari Control Towers are too cheap.

The market winds blow good to one and bad to another - 'like the very rain of heaven, upon the just and the unjust alike'. Just another day in the EVE  sandbox.
Posted by Mord Fiddle at 12:25 PM