Wine in the Ruins

I was in Saint Emilion at the end of July, soaking up beautiful weather, the historical ambiance of the town, the region's excellent red wines and way more bread, cheese and terrine than is good for me.

Saint Emilion, for those of you unfamiliar with it, is a small hill town in Bordeaux topped by the ruins of a walled medieval fortress. The walls and buildings are made of limestone, which gives the place a golden light under blue skies in the late afternoons and early evenings. The only down side to the place is the number of tourists who make day-trips out from the nearby city of Bordeaux during high Summer, giving the place a theme park quality until the crowds die down in the early evening. Then you can wander alone through the citadel's less-traveled paths, lean against the sun-warmed stone of a gateway built long before Chaucer penned his first words, and watch the stars come out. 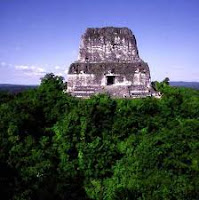 Watching a sliver of Moon rise above the ruined walls, I got to thinking about lost cities; ancient urban communities abandoned, overgrown, covered, and lost for a time to outside world.  I've been to three "lost" cities over the years and hope to visit a fourth next Summer.  I find them compelling places.  Relatively untouched over many centuries, they are a tangible echo of the people that that built, lived in, and eventually abandoned them.  In some ways the small, personal artifacts left behind in these places connect most profoundly across the gulf of years. A child's game etched on a floor, or a line of graffiti carved into a wall can speak as loudly as empty temples and broken walls.

Eve, being digital, leaves no traces behind.  We are long on epic events but short on chroniclers of the times.  As in the real world, the landscape of New Eden changes.  Powers rise and fall, pirate empires ply the void for a time and often wink out in a moment, as if they never were.  But unlike the real world, the artifacts left behind in New Eden, being a very perishable collection of zeros and ones, are quickly lost.  The memories and verbal lore of the players provide the main repository of Eve history.  But even that is volatile.  Old players leave the game and take their piece of the overall history with them.  New players arrive with limited view of what has gone before and the verbal history of New Eden shifts to encompass this slightly truncated perspective.  Over time the collective memory of New Eden remakes itself, shifting and degrading what was in favor of what is.  And there are no artifacts and only limited histories left behind to lead players to inquire who and what came before.

There are NPC artifacts in New Eden; abandoned stations and such. Player artifacts, once abandoned, do not persist.  But maybe it's time they did.  There is some discussion of making it possible to destroy player owned outposts.  Maybe their ruins should be allowed to persist until they are replaced.  Maybe a new system upgrade that allows a sov holding entity to leave behind a structure or monument that will not degrade over time, containing stories or a chronicle of who the builders were and what they accomplished; their message to future generations of players readable by those with the archaeology skill.

Just a thought; born of a glass of wine taken in the ruins.
Posted by Mord Fiddle at 7:49 AM